No restrictions
Battleground: Forest of the Death (Chuunin Exams)
Both have their knowledge from the series

Kakuzu mosty because they both use nature elements and Kakuzu has them all.
Edit : raiton vs suiton
Top

Great Shark Bullet against any of Kakuzu's elemental/chakra techniques and it's a GG.
Top

Kisame not even close
You chasing dreams, but then you stop. Guess you'll never know. Oblivion
Top

Kisame has bare chakra to smoke. Even though Kakuzu took on First Hokage he still got clapped.
Akatsuki || Recruitment || Akatsuki-Discord 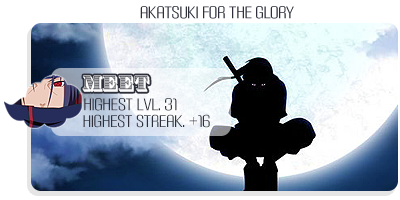 I would say Kisame.
Last edited by orochimarc on May 5, 2020 6:22:15, edited 1 time in total.
Char's Pictures Showcase
Avatars Archives
Avatars Shop
Character Pictures Shop -> in collab with the godlike figures of this area.
Top

I think Kakuzu stronger
“It is true, as they say, that the blossoms of spring are all the more precious because they bloom so briefly.”

I think kisame wins. He also faced off against killer bee who also possesses a lightning nature. kakuzu's heart is very vulnerable and probably kisame would destroy it quickly and the battle is already kisame.
Top

Kakuzu wrecks Kisame down to the fishbone.

Kisame has only been seen killing or even severely injuring people in his flashbacks, his fighting style is tactical and evasive in always using his ability to maneuver well in water in addition to his skills of outnumbering in both jutsu attacks and chakra.
But Kakuzu is all brute strength, and stupid powerful at that being able to live after fighting the 1st and breaking out of Shikamaru's strangle. It took an even stronger brute strength ability to finally take him down whereas tacticals like Shika and Kakashi couldn't overwhelm him enough. And even then, if ya think about it Kakuzu had already lost some hearts before Naruto hit him.. the dude is a beast. He's also one of the only Edo Tenseis that couldn't be sealed at all because the war fodders were basically a feeding ground for him lol.