What do i expect in the next patch!?

Keep yourself updated on all the latest balance changes.
Post Reply
3 posts • Page 1 of 1

What do i expect in the next patch!?

Hello Folks,
we had 2 big patches lately that shifted the game from meta to idk type a teams xD every one work with different teams and they all win and lose nothing dictate we end up with few things will talk about it in a moment but the questions still on the table is exp fine some agree and some says still need a change in my opinion when the ladder is so silent and no one grinding that mean there is an issue whether we see it balanced or not however still early to judge what do i expect in the next patch lets start with bugs
bugs
1.Zaku's wall of air if zaku is the last char alive in ur team zaku can use wall of air on himself which is not what it should do
2.Jiraya's Major summoning: Gamabunta this skill reset every time some one got healed and removed from him this skill suppose to not be canceled just the enemy removed from him doesnt get the extra damage from affliction damage
Nerfs
1.Ino's: mind body switch need to be 3 turns stun and 4 turn cooldown maybe this will break the sakura/ino combo
2.Young Kakashi's : implanted sharingan its 1 turn cooldown and 2 turn active time it doesnt make sense it should be 1 turn could and 1 turn active turn
buffs
i would love to see shigure rework this version is bad
kimimaro's dance of the seedling fern can do less aff to himself like 10 for 2 turns so he doesnt kill himself using his abilitys
asuma can get some buffs
Rehabilitated Gaara can get some changes too atm if play prison sand burial u just stalling the game u dont do damage what so ever
For now lets boost the game with new characters that we love and go for new era 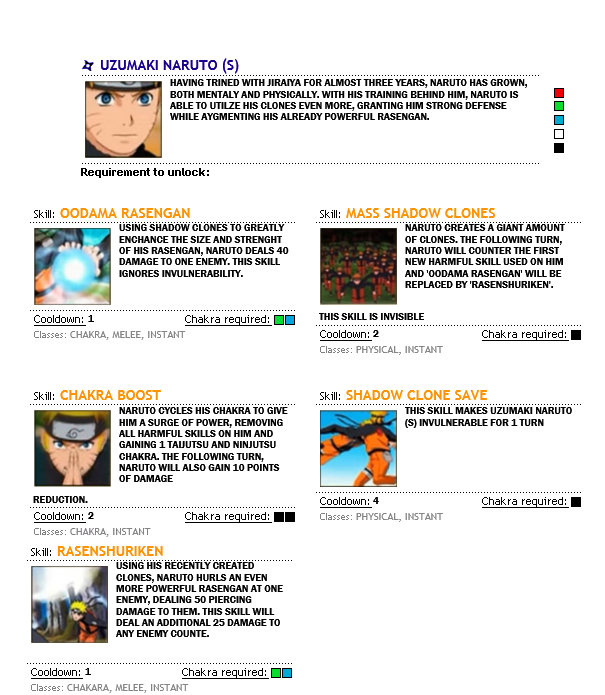 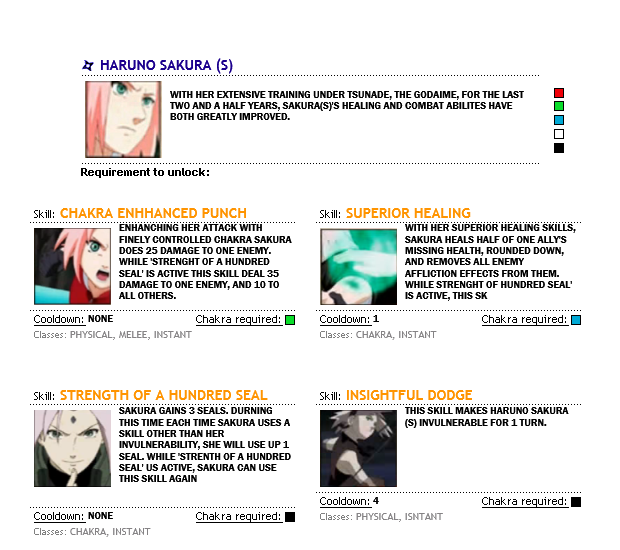 Re: What do i expect in the next patch!?

I would rather see a nerf to meta team, especially kurenai since she doesn't even need 2 gen and her stun is much easier to abuse.
Top

Re: What do i expect in the next patch!?

Someone mentioned Tenten earlier and I didn't think she is a threat. But now I think she is. Jeez. Alone, she is so-so, but pair her with a AoE stun team and it's a nightmare. Her skill cannot be countered and there are only two chars who can reflect her skill.

Also I'm using affliction team: Anko, Sakon, Shizune. Shizune can be replaced by Kurenai (again, her); or you can use Itachi instead of Anko and these teams are meta now I believe.
Or if you're believe in Chakra God, you can try Demon Brothers, Ino, CSS. I was stunned in my first turn, first fu*king turn. Unbelieveable.

Anyway, I think I will stop whining (for now) and go back to the stupid game. Jeez.
Top
Post Reply
3 posts • Page 1 of 1