Any Naruto or non-Naruto related character you may have created can be posted in here.
Post Reply
11 posts 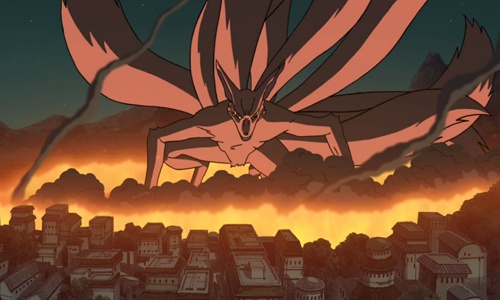 Mission Description
With the birth of 4th Hokage's child, now is the perfect time to strike. Retrieve the Ninetails from it's current host, before the Yellow Flash can re-complete the seal. 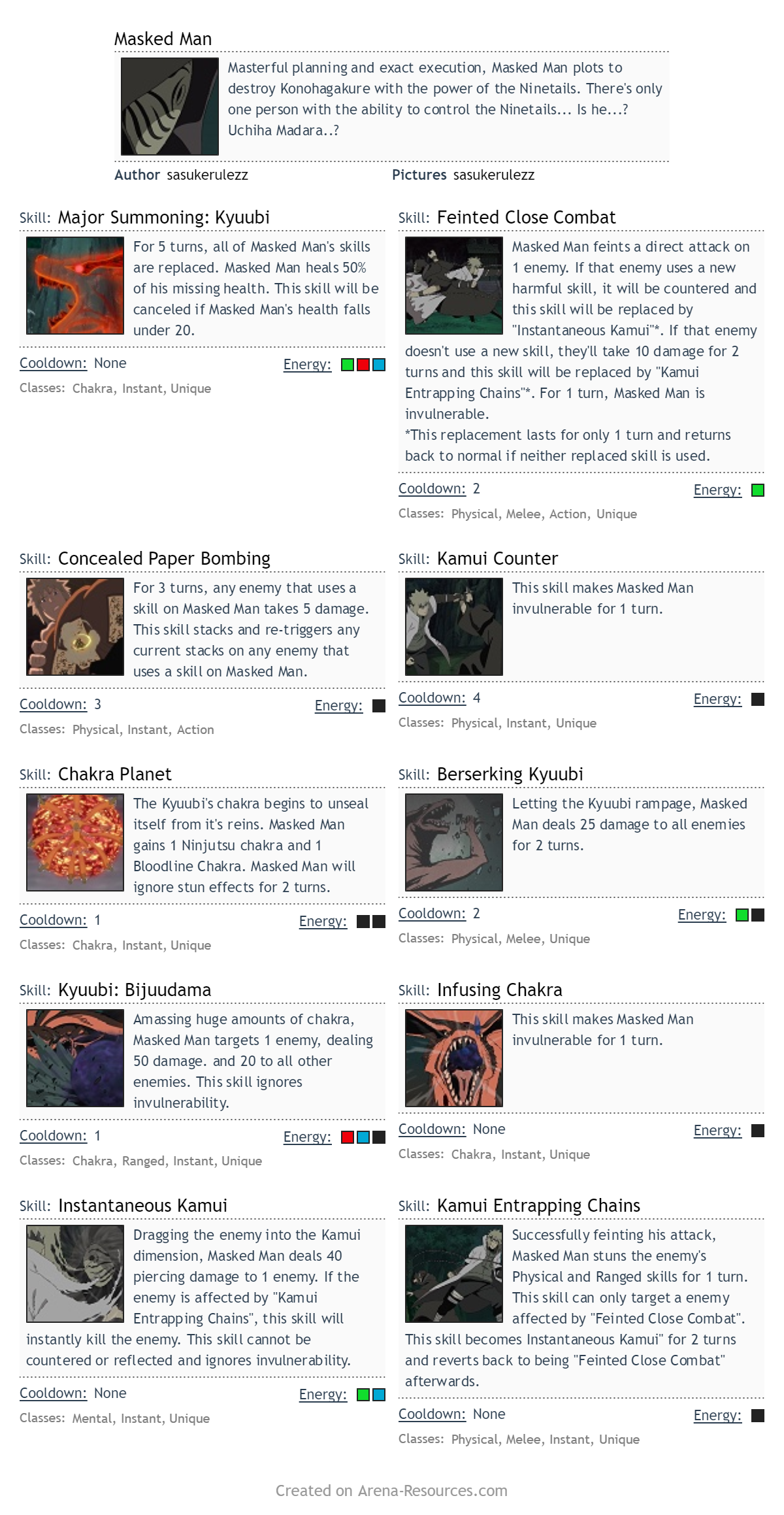 As always, a spectacular and unique character I very much wish was ingame.
11/10
~Rocks No, please no. This is the worst character in balance i have ever seen. Its cool as a concept, and it is fun to have characters that are versitile (with a lot of skills) but man, look at this powercreep. You basic did a character that is stronger than every other character in the game. There are problems in every aspect of the character. I was planning to do a detailed review, but just compare the characters cooldowns, and costs for characters in the game that do similar things. There are two major problems though:

Feinted Close Combat: You put Invulnerability + Counter in one taijutsu, with a cooldown of 2. AND IF THE CHARACTER DOES NOT USE A SKILL IT WILL DEAL 20 DAMAGE FREE. Plus, its the start of the chain to death.

Kyuubi Bijuudama: You put AoE that ignores invulnerability. There is a reason for this not existing in the game.

Lmao, this is the best reaction I could've ever hoped for without realizing I wanted it.


Watanuki wrote: ↑
November 19, 2019 0:39:12
but just compare the characters cooldowns, and costs for characters in the game that do similar things.

True.. I guess I can bump Concealed paper bombing by 1. but all the other skill's cooldowns are fine. I dont want his default skill set to be useless in a 1v1 situation considering all his skill require his other skills to be used in succession. This character has low chakra cost with high chakra management. He has to deal damage somewhere and I dont want a 1v1 situation to feel pointless in case the only skills you're able to actually use are Concealed paper bombings and Feinted Close Combat.

As a bonus, his counter only directly affects the targeted enemy. Its a visible counter and therefore not intrusive. It doesnt even stick around forever like Gaara's. (Which is a bit more overpowwered than this counter.) So this means your other two characters can target masked man and deal significant damage. I alwasy try to leave windows of opportunity in my characters as I believe that no character should be ccompletely OP.

Edit: I forgot I made him go invulnerable during this skill. Hm. Ill change that out.

Third, that last reasoning relates to the anime. Masked Obito could ONLY be damaged while he was engaging an attack too. Both examples of this is seen during the ninetails incident and the war. Minato was able to strike him while he was attacking and anruto+gai attacked him while kakashi was the bait. (They combined kamui, Tailed beast bomb, Fiery kick, and Rasengan together to trap him and deal damage.) I always felt that arena's characters should emulate what happens in the story to the best degree possible without making a character severely overpowered.

Watanuki wrote: ↑
November 19, 2019 0:39:12
Feinted Close Combat: You put Invulnerability + Counter in one taijutsu, with a cooldown of 2. AND IF THE CHARACTER DOES NOT USE A SKILL IT WILL DEAL 20 DAMAGE FREE. Plus, its the start of the chain to death.

Kyuubi Bijuudama: You put AoE that ignores invulnerability. There is a reason for this not existing in the game.

Anyway, its a broken character, sorry 3/10

To be fiar, Feinted is a chain to death, but one stun is all it takes to stop it. a counter or reflect if chains is used. Its a 3 turn insta kill. never seen before in arena. Its new, takes 4 chakra to pull off, and has opportunities to stop the chain. I think thats more than fair. In likeness, Kakashi's insta kill takes 4 chakra and 2 turns. It also completely stuns the targeted enemy. So which of the two characters allow more counterplay...? Id definitely say Maksed Man.

Tbh, the tailed beastbomb is significant. Not only is the kyuubi's version of bijuudama the strongest (ignoring the juubi of course) of all the tailed beast, but its still a bijuudama. it has to have some meaning full threat when used. The amount of chakra going into the skil's use at the BARE minimum is 6. Thats way more than fair. There are ways to mitigate the damage too. DD, dmg nerfs, stun effects if Masked Man didn't use chakra planet, counters, and reflect skills. BY making it Aoe, i significantly increased the reliability of counters and reflects mitigating the bijuudama. Theres always a window of opportunity. With the turn counter for how long the kyuubi is summoned, most plays could see only one bijuudama used. atmost 2. Summoning the kyuubi should not be taken likely and there should always be new precedents set in a game to keep it from becoming stale.

i'm happy you took my statements not as a bm, but as a true opinion. So, i will write a little more and detail my insights on every skill, than comment your response:

Major Summoning Kyubi: Its fair, and maybe even weak. Since it costs 3 mana and only heals him (enabling future skills) wasting a turn preparing Masked Man would be dangerous. I dont really know how to improve it tough. Maybe giving some damage reduction in the first turn, maybe dealing some affliction damage, maybe healing to full life. It could not be anything crazy but just 50% healing isnt enough.

Concelead Paper Bombing: I think its a fair skill aswell. You said that could bump CD in 1, but i dont think its necessary. Longer he stays in field the better this skills becomes, and five damage stacking would be good to poke some of the AoE damage dealers.

Okay, so lets analise the chain of death now:

Fainted Close Combat: Without the invulnerability the skill becames way more fair. You compare it to Shukaku's Prison, its the same cost and same cooldown, but the main benefit for you is the starting of the chain. Its like Counter followed by Stun, for 2 cost. I dont know any character that could do this (deny the opponent action two times in a row) for only 2 mana. Characters that have stun without cooldown are price (like Mind Body Disturbance from Ino, would take 4 mana for two stuns in a row) and characters that have Counters have some cooldown (like Karin or Kankurou (S)).

You can argue "oh, but he only needs to be invulnerable or stun masked man stop the chain", and yeah, thats true but how much you are spending is the main factor. I mean, if you stop Kakashi's Dogs, or Gaara's Coffin, they are losing two mana for just one stun. Can you see how this in a sequence feels strong?

Kamui Entrapping Chains: Stunning Physical and Ranged for 1 turn, costing 1, but it need a preparation. I think its fair (if Fainted Close Combat wasnt the case). The problem i see is the last phrase: Enable Instantaneous Kamui for 2 turns.

Instantaneous Kamui Since Instantaneous Kamui does not have cooldown you could use it twice, one to finish the stunned man, the other one to finish someone who thinks are protected (since it is piercing, uncounterable, unreflected and ignores invulnerability). The best way to compare is with Kakashi (S), but he has a cooldown of 1 for this reason.

So to the Kyuubi Skills now. I know that all kyuubi skills are strong considering the fact that requires the most expensive preparation in the game, but it is not fair yet. Look, all summonings in the game give acess to one strong skill that couldnt be in a flat character, but your summoning gives acess to 3. They can be strong, but cant be so broken as they are right now.

Chakra Planet: Its can be compared to Chakra Boost from Naruto (S). Naruto's skill have 3 cooldown, remove affliction, and grants 10 damage reduction, yours have 1 cooldown and grants invulnerablty to stun for 2 turn. I'm not so sure about this one, if it is balanced or not. I am not sure how much "invulnerability to stun" is worth a credit, i think the stronger the character the more this is worth.

With this said, i think granting invulnerability to stun is a cool concept for Kyuubi, and could be included in the summoning skill instead, but for this to happen all their other skills would need to be balanced. And with balanced i mean nerfed.

Berserking Kyuubi: 2 mana, 50 damage splited in two turns. Its fucking insane, even if dont triggers twice. With the current set, if someone tries to hide with invulnerability would just be blasted by Biijudama next turn. Shockwave Smash from 4 Tails need 4 random for 10 less damage. I know all the differences: Yours needs tai, and have cooldown, but your character also has a second form that does not have any drawback (the normal one, with the counter). Cooldown is not so big of a drawback, since it relates to pacing, it influences the game indirectly. If Berserking is in cooldown you would just use another skill, or spend the mana in another character it is not a nerf.

Well, i would respond you comments now, but i'm already writing this for one hour, and i think most of your points were covered up in my "review". Anyway, i think this would be fun to play, but i'm both a competitive and conservative player. I want inovation in a way that its fair, and does not shake all the structers of the game (like AoE that ignores invulnerability, i'm really in chock with this)
Top

Watanuki wrote: ↑
November 19, 2019 3:36:44
i'm happy you took my statements not as a bm, but as a true opinion. So, i will write a little more and detail my insights on every skill, than comment your response:

It took me a minute to read this with the attention it deserved. I was climbing to jounin when you replied. Now that I've finished; I understand a bit more of where my mistake lies.

Understand alot of your points and agree with most of them. THere was a misunderstanding on my behalf. I detailed chains to allow instantaneoues Kamui" for 2 turns in believing that 1 turn counts as the opponent's immediate next turn. The wording on the skills in this game is a bit back and forth. But I have a concrete undrstanding of how to word turn counts now and will do better in the future. Instantaneous Kamui was to only be allowed to be casted once per "death chain" and not intended for an immediate follow up use.

So im still impartial about nerfing Feinted still. I understand the whole 2 turn skill denying and agree that something has to give. So instead of chains allowing a stun, im thinking it should make it so that the opponent cant reduce damage or go invul? i know kamui ignores it so theres no point, but taking Feint's counter away would take away from the emulation of the character.

lmao ok ok i get it. kyuubi is busted. Bersking does bait out invuls and leaves people open for a bijuu dama. so how about this...?
i raise all of kyuubi's skills to 5 turn cooldown??!

Ok, even though I was just joking, it kinda helps..maybe. Kyuubi is only active for 5 turns, hence why I thought the high skill cooldowns was fair as is. But limiting the usage of any of kyuubi's skills to once per sumoning is a bit more balanced. Furthermore, nerfing Beserking from 25 Aoe to 15 AoE seems beter as well. (tayuya's doki summoning). Making bijuudama unconterable is unimaginable due to minato actually countering it himself. so instead of making it AoE, having it do 60 on one character seems like a good cutoff.
_____________________________________
__________Recent Characters___________

all of your characters are amazing 10/10
Top